The Department for Transport and some anti-metric campaigners have argued that Britain should not adopt metric signage for reasons of cost. However, this argument does not stand close examination.

UKMA’s report ‘Metric Signs Ahead‘ estimates that if averaged over a five year conversion period, the costs would amount to 0.27% of annual roads expenditure. This surprisingly modest investment arises from a variety of reasons.

Most signs show no measurements

The majority of Britain’s traffic signs do not indicate any sort of measurement and therefore would not need to be changed from imperial to metric. Some examples are shown below. 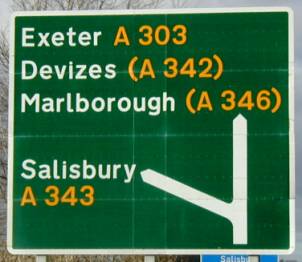 Signs can be converted by fixing a cover plate

If a small part of a sign needs to be converted it is possible to rivet a cover plate with the new measurements. This technique is used routinely to make smaller adjustments to existing signs such as the one shown below.

In this example the text “Council Offices” has replaced older text. Metric measurements could replace imperial ones in the same way. While the results are not always as good as a complete replacement, they are often adequate.

Signs can be converted when life expired

Traffic signs are usually constructed using a vinyl reflective layer on an aluminium plate. The reflective layer wears out over time and it is normal to replace the signs after a lifetime of 10 years.

In Ireland, imperial signs were replaced by metric ones over a period of 10 years. This meant that no extra costs were incurred over normal replacement.