Many British people enjoy walking and cycling. Serious mountaineers, long distance walkers and touring cyclists rely on Ordnance Survey maps for navigation. Yet sadly, Britain’s measurement chaos means that most signposts for walkers and cyclists use different units from those shown on their maps.

There is a very wide range of Ordnance Survey (OS) maps available but walkers and cyclists will generally use either the 1:50 000 Landranger or 1:25 000 Explorer maps which provide the level of detail of landscape and contours needed.

Although the Ordnance Survey grid is very familiar, it is less well known that this grid is based on kilometre squares. Furthermore, this grid is not a recent innovation but something proposed as long ago as 1939 by the forward-looking Davidson Committee. From 1940 onward, all newly published maps were based on this grid – although they were initially printed at the scale of one inch to the mile (1:63 360).

The extract from the SE corner of the Aldershot map above demonstrates both the use of the kilometre grid and that fact that it was first published in 1940.

Contours were surveyed in metric from the early 1970s and all newly published OS maps are thus entirely metric.

Hundreds of thousands of British walkers and cyclists rely on metric OS maps to navigate safely. Even many elderly people who learned to navigate using the OS National Grid system (northings and eastings) may have used metric for many years without knowing it. The 6 figure grid references locate a place in Britain to a reference accurate to 100 metres.

The photo above of a compass superimposed on a 1:50 000 map of Glen Coe shows how the OS grid is based on kilometres and how easy it is to read kilometre distances from the map. 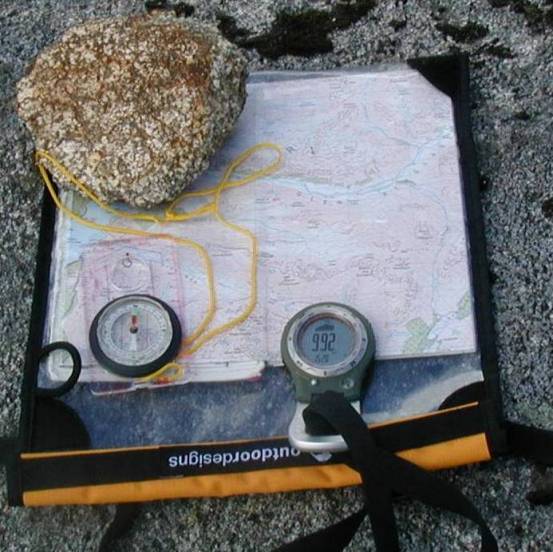 Indeed the foundations of safe navigation on Britain’s mountains, moors and cliffs are OS maps and a magnetic compass. In recent years altimeters which allow elevations to be compared with map contours have added to mountain safety. The picture taken on a mountain in the Central Highlands shows the altimeter reading as 992 metres. This can readily be compared with metre-based contours and spot heights on the map.

Britain’s outdated traffic sign regulations mean that many local authorities have felt compelled to erect footpath or cycling signs using imperial units. Although metric signage can be perfectly legal provided that the appropriate planning consents are obtained, most signage erected still uses imperial. This does not help with navigation!

Take the example of a walker on the South West Coast Path in Cornwall. A person walking form Portreath to Porthtowan will see a sign like this: 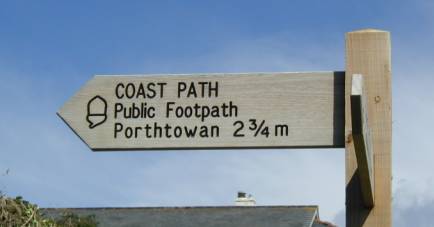 Some local authorities have produced hiker-friendly signage that matches maps. Such councils should be commended for looking forward and encouraging safe navigation.

For example a walker to Loch an Nostarie will find distances marked in kilometres.

In this case a hiker can readily compare the 1.5 km on the signpost with one and a half squares on the OS map.